A right royal battle took place at Moffat between John, Rory and Kev on a perfect evening for running. The results are on our Senior results page.

After a frantic first mile Rory and John opened up a gap on Kev but he came back during the second half of the race and a real race took place with all three fighting for positions into the last half mile. Rory came out on top but John was hot on his heels. He continues to show great improvement this season despite being injured for two months. Kev was not far behind but it just goes to show that with runners of similar ability you can see some great times being produced.

There were other notable performances and faces who have arrived back on the scene after time spent getting over injuries. Andy R , Peter R were both welcomed back and the Palmer brothers had their own sibling battle with the younger winning out in the end. Craig , however did beat his younger brother on the age grade %.

Runners now move into the final part of the season with the Doonhamer 10km on Sunday. Course details are here. 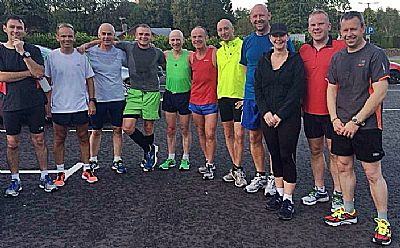