From fat to fit - Ewan's story.

After years of being very unhappy with my weight/looks I decided enough was enough when I felt too uncomfortable going outside in a T-shirt so in the summer of 2016 I was going to lose weight.

Following a substantial weight loss of 2st 7lbs in the summer of 2016 11st7+ down to 9st I was desperately looking for things to do that I couldn't have done as easily before. Around this time my dad was trying to get back into running, he would get up at 6am before work and hike with my dogs up a hill a few miles from my house accompanied by his friend Martin Coupland an ex-amateur road cyclist. The hill in question was 7.2miles and 1000ft of elevation gain. I did think on occasion about going along but in my mind I knew and always had told myself "i'm not a runner" or "I can't run the length of myself" so when my dad suggested trying running one evening i laughed...

A few days passed and the comment fermented in my mind, I laced up an old pair of nike trainers and headed out for my first run by myself. Embarassed if anyone saw me, I went out in the rain and headed for the hills. My legs ached and my lungs burned but I was smiling. I walked and ran up a trail i used to cycle until I reached the top of Gallow Hill (only about 2 miles in and 450ft up from home) but I felt proud. A rush of accomplishment covered any feelings of embarassment or pity in my lack of fitness. Little did I know I would soon live for this.. I set off back down the hill sliding around on the clay path and laughing to myself.

Around an hour later I arrived back home. My legs were twitching and sore, I was sweating more than i ever had done but I was exstatic. I couldn't wait to tell my mum and dad. I phoned my dad at work and he suggested I went along to a "stick walk" and he was serious. I think i agreed cautiously..

A couple of days later, there I was at 6 am rolling out of bed into a sunny Moffat morning about to go for a RUN. This coming from someone who used to eat apple crumble and custard for breakfast..

We arrived at Craigieburn Forest fueled on half a banana and a black coffee. We set off and I was the only one yawning and wearing heavy eyelids. One foot in front of the other for an hour until we arrived at the top and began the run back downhill. I thought to myself "ahhh the easy bit is here freewheeling all the way to the car!" haha boy was I wrong.

My legs and shoulders ached, I had a stitch and my hands were bright red and frozen but I still didn't regret my "decision" to come along. I thanked Martin for letting me come along and went home for a shower and some well earned breakfast, all this before old Ewan would have rolled his chubby behind out of bed.

The next day I was too sore to join them so I stayed at home and RESTED. However, the next time I joined them i was already stronger than before, This time I ran every downhill and uphill. Once we got home after this trip my Dad began to mention hill running this and hill running that, to my deaf ears. I must have nodded or something because on a sunny evening soon after, I found myself at the very bottom of The Beeftub and about to climb up the steepest grass slope I had ever seen, to the road, then run round the rim and run back down. However when we started climbing My lungs felt happy and my legs felt strong. To my own surprise I could do it (this became a common theme later on.) Running the downhill was a different question however, well out of my depth I pottered down miles behind my dad and Martin but I was still having a laugh. This, I found out was a "rekky run" for a very tough little fell Race conveniently called The Beeftub Fell Race.

That night Dad bought me my first pair of real hill running shoes with his Birthday money (I am eternally greatful) Inov8 Mudclaw 300's for £80 off of wiggle, what a lucky lad.

A few days later I went out to try my new shoes and had to turn back a mile out as I'd injured my knee. A few weeks past before it got better

Now I had fell shoes it was time to do some proper runs. So one rainy autumnal evening I was introduced to the ADAC mob, Kev, Michael, Alan and the rest. We set off on the "monday loop" by torchlight and I was warmly welcomed into the family. As we ran I was pleasantly surprised with being not only able to keep up but be in the middle of the "pack".

After we finished the hilly 6 mile loop We had sweets and I was informed about a race around the same loop which was set to take place 3 days later which I was soon roped into.

We turned up in the duckpond car park early on a saturday morning in bright kit, contrasting with everyone's feelings and the weather. People discussed reasons why they wouldn't be running well, which didn't settle my nerves one bit.

After half an hour of chatter we lined up at the unofficial start line and set off, Dad's garmin failed and so me and him were 2 minutes behind the middle group.

We set off together but after the first mile he sent me on my way, I soon caught up with some runners at the top of Beechwood and wished them all the best. As i came into the open I saw runners bobbing up hind hill around a mile ahead. Jokingly I said "I'll catch them yet" 15 minutes later I overtook them on a long road straight running 6min miles for the first time to come in 4th Behind Adam Anderson, Graham mclellan and Mark Whitelaw. I was exstatic and the support from everyone was amazing, the  best feeling was knowing not only how far I had come but seeing how proud my Mum and Dad were.

At the second race of the ADAC winter league "Wamphrey Glen" hosted by Kev plummer I set off with my dad again and raced on the red-line as I still had no clue about pacing and managed to come third behind Adam Anderson and Mark whitelaw.

Next was a real hill race at Tinto, 5 miles and 1500ft of elevation. Me and dad were up early again, a big bowl of porridge with a banana and honey was on the cards for this venture. Nervously we set off in the car far too early and were the 11th and 12th people to register. At least we looked keen haha..

As we were over an hour early we sat in the car listening to the radio whilst i tried to calm my nerves by asking hundreds of silly questions "Is it Hard?" "Will I be able to run it?"

Luckily my tactic half worked on my part and i laced up my shiny inov8's and headed for a warm up and a PRD. Then we waited at the start line, I was shaking like a sh*tting dug. We were placed near the back as neither of us fancied a chance at the front with those nutters... However halfway up the hill I had passed most of the "nutters" and was 45th to the cairn. (Hold on Fat Ewan was actually doing alright? yep. I know) I did get passed by a few people on the way down including ADAC's very own Mark whitelaw and Adam Anderson. 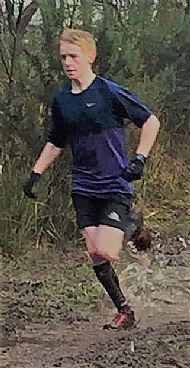 I ended up pretty tired at the finish but was 55th...

Very happy and wobbly i stumbled to the side got a cup of juice and waited on my dad who did equally well in 46:25 and 108th, incredible for a 50 year old ex-rugby player. Very proud son.

5 months later I and many others from ADAC were stood at the base of Screel near Palnackie. By this time I had been trained by ADAC's very own Joe Boardman and I kind of felt not too under-prepared. Thankfully Graham had taken me and my dad for a reccy of the race route the weekend prior so we knew where to go (cheers Graham!) As this was only my second hill race I was still bricking it. The start seemed to be so un-coordinated yet everyone knew exactly what was going on..

This time I placed myself at the front still with low ambitions.

As we raced up the fire road and off up the singletrack adrenaline and shock blocked out any pain or tiredness. It took me until the track flattened off at the summit of the hill to realise I was in the lead. I knew I'd lose it on the descent though as It's something I really struggle with.. 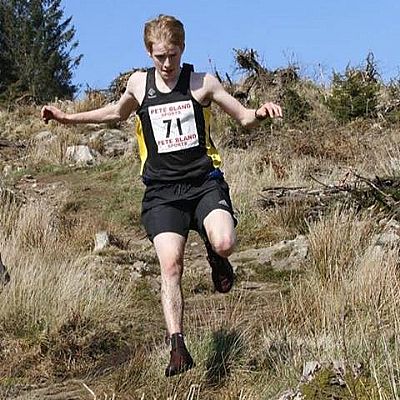 However as I approached the slippy scramble Back up the hill I was still leading the race.. It was such a surreal feeling I thought I must've totally paced myself wrong but was willing to put in a shift to keep it going. As I descended down to the fireroad sprint I pretended I was on my bike, full of adrenaline I found descending simple. I hit the fireroad and managed to muster a sprint to the line to finish 2 minutes in the lead. I'm still not sure how I managed it but I've certainly got more than a few people to thank.

Massive thanks to my Mum for supporting me with good food and emotional support when I'm trying to push myself out the door and for putting up with me when I'm knackered and grumpy lol.

To my Dad I can't thank enough for getting me into running and teaching me all I know about the hills and all the pep talks he has given me before races. A genuine underspoken hero.

To Joe Boardman for the amazing coaching and racing advice and pre race chats!

To Graham for reccying screel with us because there is no way I'd hace pulled it off without it!

Also a massive thank you to everyone at ADAC for your unbelievable support and kindness!

A few days after writing his blog Ewan competed in the Holywood stroll  5 mile road race in Dumfries finishing in an astonishing 3rd place and turning many heads in the running world. It is a fantastic read and we have an athlete with a great deal of potential here. ADAC is very lucky to have you Ewan. (José)

Please note that whenever you submit something which may be publicly shown on a website you should take care not to make any statements which could be considered defamatory to any person or organisation.
site map | cookie policy | privacy policy | accessibility statement