Picking up where London left off it took me a long time to get back to being able to complete long runs.  I had entered Manchester as it falls earlier than London and my aim was to NOT be sitting at home watching London 2017 still low about London 2016. 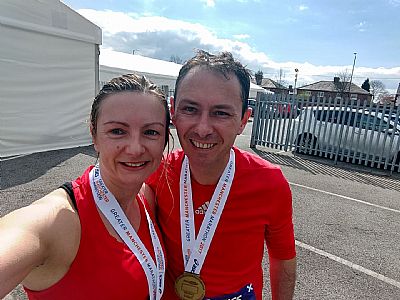 This time training was completely different.  Family life is always hectic.  Add into the mix that Mark and I both work full time, that my 2 eldest boys are sports daft and have their own clubs to be taken to and that Mark also does his fair bit of running and it’s fair to say that our own running falls near the bottom of the list of priorities.  After being really diligent training for London my approach was definitely stripped back, I wasn’t going to the gym for a 7.30am spin class because I really didn’t like spin and I valued my sleep more.  My training consisted of one long run at the weekend plus 3-4 half hour sessions in the gym, usually 2-3 treadmill runs plus a weights class.  Using this formula mileage built up and by January I was running 16 miles regularly without any problems or stiffness.  I got one more long run in of 17.5 miles in January and did feel stiff after that, amazing the difference the extra 1.5 miles made but still not injured stiff.  Not a classic training programme for the best marathon ever but it fitted with my work and family commitments and seemed to be working for me.  Less pressure too.

Sometime after this 17.5 mile run my Achilles started to bother me and it didn’t really settle at all.  I was stretching, getting massages focusing on my calfs, trying heel inserts etc etc but it just didn’t settle.  I was grumpy for a while with it, but did a few long turbo sessions to banish the blues.  Time went on and following rest it seemed ok on the first run but if I ran again it flared up.  Eventually I decided I would just make up my mind during what should have been taper time.  Mark went with me for a 6 mile out and back run at what would have been London’s marathon pace (about 9 minute miles) and I had to stop after 2 miles to stretch, my breathing was all over the place.  It wasn’t the Achilles it was just a lack of running fitness.  I bit back tears and carried on another mile before turning and completing the run as planned (albeit with a little pause), I then went for a 1 mile cool down.  After this I decided I would still go for Manchester but was aware I would struggle a bit with pace.  I figured that due to a lack of training I would struggle to hold any pace consistently.  I decided to start at my planned marathon pace and be prepared to slow if need be.  The most important thing was to finish.

The lead up was much more low key for this race.  It wasn’t a secret but I didn’t shout about it and really only told the closest friends, family and ADAC members.  I didn’t run for charity but for my own personal achievement.  Mark and I headed off on the train to Manchester.  A much shorter journey and accommodation much cheaper.  We booked the Ibis in Salford Quays and it had everything we needed and was a 10minute walk from the start.  It also had some restaurants directly opposite it and a wider selection at the Media Centre which was a 20 minute walk away.  The Tram station was directly opposite too so it was very well linked to the city centre.

The race has a reputation for being fast and flat.  The start is from the white arch near Old Trafford football stadium and the finish at the Old Trafford Cricket Ground nearby.  We walked across to the finish area (exclusively for runners) and dropped our bags.  No queues, no bother.  We had the usual wait for portaloos and then soaked up the atmosphere at the start.  Non-runners can accompany their runners right into the start area so it was probably more crowded than it needed to be.  There were pacers present and directly around them the runners were deeper but it felt a lot more relaxed than London.

Once the gun went it took 12 minutes to cross the start, this was much longer than in London and I’m really not sure why because once we got going there was none of the jostling I experienced there.  The crown support was good.  I liked that there were not crowds everywhere and that made you get a boost when the streets were lined.  The pockets of supporters were armed with sweets (the usual jelly babies/beans as well as squashies, haribo, fizzy sweets and even pokes full of jaffa cakes).  The official refreshments (water and sis isotonic gels) were also plentiful throughout the route.

There were a several along the route: choirs and brass bands, kids outside a house blasting ghostbusters, people with hoses/water pistols.  The marshals along the route were fantastic and so energetic.

The route was almost entirely flat, any inclines were very gentle and short.  There were some stretches of the route which felt long (it was a marathon after all).  The first one was heading out to Altrincham where the outward bound runners are on miles 9-11 but on the other side of the road are runners on mile 14-16 after snaking around Altrincham.  It felt long on the way out but fine on the way back.  The other stretch that seemed really long was the finishing stretch.  It was 0.5 miles long and you could see the “FINISH” lettering gradually come into view on the arch.

After the finish line came a very short walk into the Cricket ground where we picked up our finisher’s bag with medal, Asics technical t-shirt (annoyingly only mens sizes though!), protein bar and water.  We also got a pint of alcohol free beer (Erdinger) and a massage for a £5 charity donation.  There were no issues with bag collection whatsoever (Manchester had previously had issues with this and the route measuring short).

I would recommend the marathon experience and Manchester.  It felt so much more relaxed than London with only a short walk to/from the start and finish area from the Hotel and no rush or hustle or bustle in the morning trying to get on the tubes and train.   I got round in 4:28:19 and I am very pleased to have got under 4.5 hours.  It’s not the time I had hoped for in London but still respectable and something I can think about improving if I get a good run of training beforehand.  I would like to aim to run a consistent pace throughout.  I’m still trying to convince Mark that he should do another with me……

Please note that whenever you submit something which may be publicly shown on a website you should take care not to make any statements which could be considered defamatory to any person or organisation.
site map | cookie policy | privacy policy | accessibility statement