The 2015/16 Winter League Fixture list has been updated due to the change in date of the ADAC River Races.

The League will consist of the following 8 races:

The best 6 results will count, 10 bonus points to anyone doing all 8 races.

More details and information on the non-Champs events (Winter Festival) are given on the LINK. 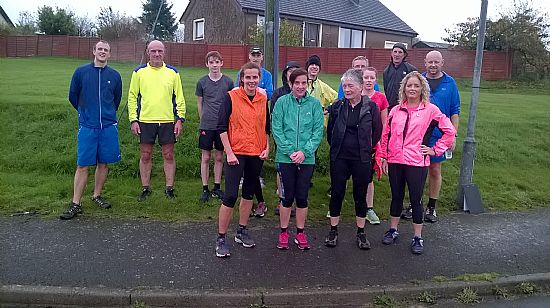 A field of 17 took part in the first Winter League fixture of the 15/16 season.  Contrary to the good weather experienced for the majority of the summer season the Winter League started off in damp conditions although for the duration of the race the skies did clear a little. The route was the out & back course from Eccelefechan to the summit of Burnswalk and reports were of heavily puddled roads and slippery conditions on the hill itself.  A number of regulars were missing or out injured but there was still good competition across the piece.

First on the day was Rory Longmore with a time of 38:15 which secured an age-grade score of 80.58% and top score in the category too.  Michael Kerr was hot on his heels and clocked a strong time of 40:32 and Chris Palmer was third home in 47:10.

Thanks to all who helped with after-run catering and race marshalling before and afterwards.  The next League event is on the 22nd Nov in the form of the Wamphrey Glen 5m which is hosted by Kevin & Louise Plummer.

There was a record turnout of 37 Annan and District Athletic Club and local off road runners for the latest event in the winter league series, The Wamphray Glen Race. 3 days before the race the ground was very water logged due to all the recent rain, however a change in weather on the last two days running up to the race meant that the underfoot conditions improved a bit to leave the course just very muddy in parts.

On the morning of the race the sky was blue with bright sunshine.  While it was cold, the conditions were almost perfect for running. The course is a varied one taking in a bit of Cross Country, Trail and Road. In the men’s race Mark Whitelaw led from the front steadily pulling away from last year’s winner Adam Anderson and another former race winner Rory Longmore. Mark won the race in a new course record time of 33:06 just a little over a minute ahead of Adam, and Rory came home around 30 seconds after Adam. Considering Mark had just returned from 2 days’ winter hill running in the Lake District so was not fresh, it was a superb effort.

In the Lady’s race Kerstin Leslie also led from the off and finished a clear winner in front of Emma Kerr.  In doing so she broke her own old course record.  Her time today was 38:05, but given Emma’s young age she will no doubt be cutting into that lead in the next year or two, being just under 4 minutes behind. In third place, and running her first ADAC race, was Rosie Alan-Henderson.  Rosie was around 2 minutes behind Emma.

The very muddy underfoot conditions were reflected in most runners posting times slower than last year with a couple of notable exceptions. However Roger Irving was the most improved runner reflecting his return to running after years of problems with a back injury where at times it looked like he may have never run again.

After the race runners returned to Station House for hot food, drinks and cakes supplied by the ladies of ADAC.

Well done to all the runners who turned out - and a special thanks to Kevin & Louise for their excellent hospitality and course preparation.

A thank you to the land owners, The Crown Estate for land access to the Wamphray Glen.

Results now updated and available through the links above.

We have a new course record, congratulations to Mark Whitelaw who clocked 31.17.

First female on the day was Barbara Dawson in 39.29.

In a change to the scheduled run through Millhousebridge this race proved to be an absolute winner with a grand total of 28 athletes taking part. There were notable performances but all agreed that the correct decision had been made regarding safety during the week. Many of the roads were still flooded after recent rains and the change to the programme went down well. Ground conditions were a little tricky with some snow on the ground but this did not deter from some excellent performances.

Results will be published soon on the website but fastest on the day was Rory Longmore in 30:42 (breaking last year's course record!). Young Michael Kerr was next home in a time of 32:05 with newbie member Graham Mclellan just behind him in 32:12.  Richard Smith turned in a fine performance in 37:33 and Janet Priestley was first lady home in 38:27. Afterwards all athletes were invited back to casa del Alan Cameron for a well deserved bite to eat.

It was also a time to celebrate his 50th  birthday and there was soup AND cake !

Many thanks to both him and Linda for their kind hospitality. 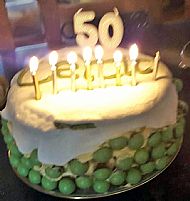 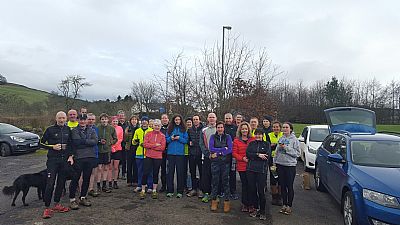 A field of 31 runners assembled near to Beattock on Saturday morning to tackle to 5 mile Crooked Road course which was the 5th event in the 2015/16 ADAC Winter League.  Although cold with the threat of a shower always present the course conditions were generally good, thanks in part to some rudimentary drainage work by club members earlier in the week to address some standing water further up the course.

League leader Rory Longmore was still struggling after recent illness which open up chances for other to close the gap on his lead. In the event it was Andy Render who was making his first appearance in the League this season who was fastest on the day with a time of 33.28. Second was Michael Kerr in 33.52 and Graham McLellan (on his first run over the course) in third with 34.08.

First lady home was guest runner Rosie Allen who in the process set a new ladies' course record of 39.59 just bettering the previous best by 1 second.  Barbara Dawson was second in 40.28 and Emma Kerr third in 41.26.

In the age grade reckoning the highest score went to Longmore with 79.05% despite his lurgy, followed by Janet Priestley 73.91 and Render 72.66% in third.

In the men's league Rory retains the overall lead with a score of 111, Michael Kerr is second on 89 and Kevin Plummer is third with 84. The ladies'competition is led by Janet Priestley with 122, Emma Kerr is second with 64 and Liz Dawson has 52.

Thanks go to Jim Buchanan for signing the course, Nigel for his drainage work and all who supplied soup, tea, coffee and sweet treats afterwards.  The next event is the River Race on the 21st of February.

Almost 30 runners took part in the latest ADAC Winter league run on Sunday. The Tour De La Moffat 5.7 mile course is always very popular and with the glorious weather we had , the views over Moffat were fantastic.

In the men’s competition Mark Whitelaw claimed first place with a time of 39.24 (a new course best!). Adam Anderson finished second with a time of 41.11 and Martin Coopland finished third on 41.39.

Of the ladies Rosie Allen again took first place with a time of 49.56 (Rosie is likely to be a real contender when she joins the club in the summer!). Janet Priestley took second with a time of 51.59 and Liz Dawson finished third on 56.23.

Other runners who had a good run on the day were the ever improving Billy Kerr, Yvonne Kerr, Linda Cameron, Kenny Patterson and Linda Minto who is just back from a long layoff after injury. There were also some fantastic times from the guest runners with Rick Wood coming home in a very respectable 46.36.

Well done everyone, special thanks go to Jim Buchanan (and friends) for signing and marking the course.

Mark Whitelaw now leads the men’s championship and Janet leads the ladies with one race left to go which is Potholm 5 mile run at Langholm on 19th March.

The final race in the 2015/16 ADAC Seniors' Winter League took place at Langholm over the well known 5 mile Potholm route.

17 runners turned up a fresh spring morning and there was good competition throughout the field. It was a tight contest in the men’s race with Andy Render coming home first in an impressive time of 31.07. Not far behind in second was Rory Longmore in 31.37 and young Michael Kerr took third with 33.33.

In the ladies' event Janet Priestley came home first in 40.26 , Liz Dawson took second in 41.27 and finishing third equal with a time of 48.03 were Yvonne Kerr, Pam Coutts and Linda Cameron.

Well done to Rory and Janet and to everyone who took part in the Winter league, a special mention to Joe Boardman who was the only runner to complete all eight events despite being a self confessed winter-sceptic!. Thanks to Andy Render for working out all of the scores and managing the fixture list and also to all who helped with signing, marshalling and catering during the season.

The Seniors now have a little break in their busy schedule before the Summer Road Championships start. The first race takes place on Tues 19th April and is the 6.7 mile Brydekirk run. All details are on the website and everyone is welcome. 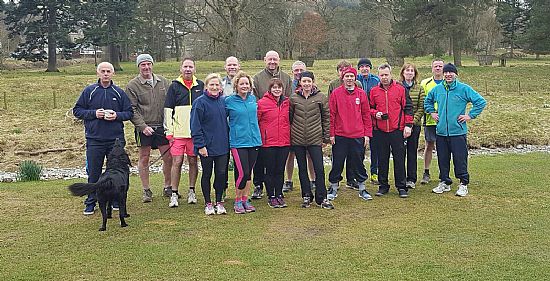 Due to the Newbie car park being unaccessible the annual pre-Christmas fancy dress run was relocated to Annan town for a 3.8 mile (2 lap) route around the southern area of the town.  The conditions were very windy but thankfully the rain held off for the duration of the run which was again a great success.

A total of 29 runners and walkers (plus three dogs) took part in a range of costumes covering Santas (both Father and Mother Christmas), reindeers, elves, Christmas trees and even his holiness Cardinal Cameron of Lockerbie parish.  There were no competition points at stake so there was a chance to relax and enjoy a Sunday run in good company and raise a few strange looks from the locals!

Happy Christmas to all ADAC runners, walkers, supporters and friends!