Our Summer league winners are as follows:

Click here for pictures and reports from our presentation evening.

The rain did not stop our ADAC team from putting on good performances despite one or two of them having to do the breast stroke in one or two places. First home for the club was newbie Ross Wellburn and first lady home was  Katrina Smith. Well done to all who braved the elements. 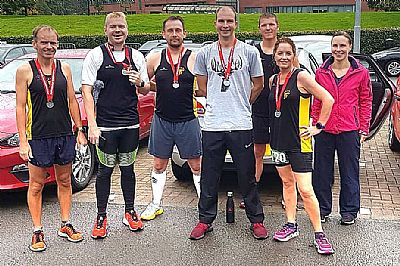 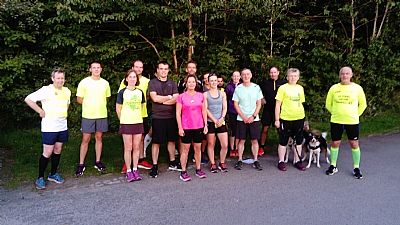 Summer weather greeted the runners as they took on the task of getting to Brydekirk and back. Quickest home was our newest member Ross Wellburn who is showing some fine form and making great improvement in a short space of time. First lady home was Marie Marshall who is looking very good and was only a few minutes behind Ross. Well done everyone !

Another good turnout of athletes competed on tuesday evening in dry but very windy conditions.

First home again for the club was James Taylor whilst the first lady was Marie Marshall. Well done everyone.

The sun was out for most of this race but there was a shower towards the end and a stiff northerly wind which kept the athletes "cool" but was hard to contend with on this hilly course. A fine turn out of ADAC athletes travelled over to the Muckle toon and battled well against their rivals , the course and the elements. First home for the club was Joe Boardman and first lady was Janet Priestley and there were some excellent age grade % especially on this hilly course. Joe and Gordon Vivers won their age categories and it was great to see some runners who haven't competed for a while. Well done everyone. Results are below.

Another good turnout of ADAC athletes competed at the Dumfries 19km race held on Sunday. The sun was shining and it was pretty warm for the athletes. The times reflected this and only 8 athletes managed a Sub 40 minute time in total. Our results are below. Neil Richardson was first home for the club and Marie Marshall was the first lady home. Well done to everyone who competed in tough conditions.

The weather was a bit cooler for the latest town run which was a new one around the roads near to Powfoot and Cumertrees. The route included a tricky (and muddy) forest section which athletes had to contest with but all managed around the course safely. Many thanks to Alan Creighton who organised the race along with Barry and Joe who helped with signing the course along with Linda who provided well earned refreshments after the race.

This race is a very hilly one and team ADAC was out in force to tackle this course with the big "HILL" around mile 4. There were some excellent performances with Marie Marshall and Liz Dawson gaining honours in their respective age groups. Well done everyone. Results are below :

The annual 5 mile road race took place on a warm evening in Castle Douglas. ADAC had a good turnout at the event and first home for the club was James Taylor who is flying at present but suffered an injury last week and got round just got round and took 3rd Male prize.

Marie Marshall had a fabulous run taking quite a few scalps along with the 1st female prize. Neil richardson is starting to show some good form whilst it was good to see Jack Johnstone back out racing again after injury problems. Katrina Smith is starting to show some good performances as she gains experience. Norman and Joe had steady runs whilst Geoff improved again on his previous attempt at this race - a sign that the training is paying off whilst Andy Johnstone continues to make progress and it was good to see Andy Robb competing and finishing respectively. Well done everyone.

Eight ADAC members travelled across to Kirkcudbright for the Buckland Burn up race on Saturday 22nd. The weather was good for running. Not too warm and a nice breeze off the sea. This very scenic race follows the coast road for the first 2 miles then heads inland to mile 4 where runners are greeted by a "small" incline. This is such a good test of strength but runners are rewarded by a downhill last mile or so back into the town. Some good individual performances not least by Marie Marshall who took the ladies Female shield home. It was good to see newer members taking part in ADAC colours for the first time. Well done everyone ! Results are below :

This was the second Town run in our Summer series held on a lovely evening in Lockerbie. Hosted by our very own George and Linda Fraser this was followed by welcome refreshments. Many thanks to them and to all those who helped sign the course (with our new signs thanks James) and marshalled and made sure we were all safe and sound. Results are below:

A total of 52 runners and walkers enjoyed this tough course on a pleasant evening for running. Full results are below. The winner was Terry McCluskey from Lochmaben with local runner James Taylor of ADAC in 2nd place. Neil Richardson also of ADAC was in 3rd place. The first lady over the line was Donna Burns , 2nd was ADAC's Marie Marshall with Cath Burns in 3rd place. First female local was our own Katrina Smith. Many thanks to all who helped on the day and to our race director Linda Cameron who put on a great race.

Several ADAC runners travelled across the border to take part in this 10km and those that did enjoyed the event. The Johnstone pairing of Jack and Norman finished together on the line as did Liz (first lady) and Geoff. The evergreen George Fraser finished 3rd in his age group as well. Congratuations everyone !

Kirkcudbright Half Marathon May 25th

Conditions were not ideal for this year's Half marathon but thankfully it was not as hot as it has been in previous years.

Two ADAC representatives travelled over for the event and all had a decent run with James Taylor coming home first again for the club in 91:33. Well done to all who participated in this event. The course was slightly different to last year but certainly not easier.

A fair number of ADAC members travelled across the border for the popular Carlisle Urban 10km race which takes in some tricky obstacles including steps and .............some cattle ! Last year's race was hampered by hoards of midges down by the riverside but this year the problem did not seem to happen due to a strong breeze throughout the course. First home for the club was the ever improving James Taylor in 40:33 with Liz Dawson finishing as first lady in 54:00. Gordon Vivers had an excellent run finishing 2nd in his age group. Well done all !

A good ADAC turnout was present at the Holywood stroll 5 mile road race which took place in pleasant conditions. First home for the club was ........James Taylor in a very good time of 30:53 taking quite a few local scalps along the way. First lady home for the club was Liz Dawson in an excellent 40:09 and both Liz and Gordon picked up the age group awards in their categories. Well done everyone. Results are below.

The first town run took place at Hightae on April 30th  on a pleasant evening with a good turnout of ADAC members present. First home for the club was Jack Johnstone who was closely followed by our first lady Marie Marshall in 43:41. Well done everyone !